When you look back at the price development of classic Bentleys, you see changes in the demand. For a long time enthusiasts were mainly interested in one of those well-known green open cars. Even though such a Bentley had a replica body. That has changed in the past decade. People prefer originality and are willing to pay more for it.

Bentley is one of the best known brands of exclusive and sporty cars. That image was created in the history of the brand. We all know the well-known green open cars and often see them at events or we see them driving in rallies. But when we see such a car standing or driving, there is a good chance that we will see a car with a replica bodywork. Many will think that this type of coachwork was characteristic of the W.O Bentleys. But that is not the case. Most cars had closed bodywork. This certainly applied to the examples that were built after 1925.

How is it possible that many think that a W.O. Bentley has a green, open body and that so few cars with closed bodies are left? That is a matter of taste and of supply and demand.

Bentley cars at an event.

In the fifties and sixties old Bentleys, with their closed bodies, often had little value. That certainly applied to the Weymann-type fabric bodies in a tatty state. Often replacing the closed coachwork with an open replica was the only alternative to the scrapyard. But as the years passed and classical W.O. Bentleys became more expensive and things changed. The replicas conquered the market.

When authors wrote in magazines about the history of Bentley, the victories at Le Mans were repeated many times. That contributed to the sporting image of the brand. And the cars that formed the basis for this sporting image were the green Vanden Plas Open Tourers who had driven at Le Mans. Many enthusiasts wanted such a car. But these Bentleys had not been made enough. The demand became larger that the supply. A solution was found. Good, original closed bodies and two-seater bodies were removed and new replica bodies were placed on the chassis. Usually in the style of Vanden Plas “Le Mans” coachwork. Other parts of the car, such as the fenders, gasoline tank, etc., were also replaced to increase the similarity. Optionally, the chassis was shortened or the engine was fitted with a compressor. The reason for this was simple: A fake “Le Mans” Bentley had become more valuable than an original car with a “less desirable” coachwork. And because the market asked for it, countless Bentleys were changed.

In May 1990, Mike Worthington-Williams wrote a critical article about this in Classic and Sportscar. He complained that many closed bodies ended up under the demolition hammer only for financial gain. A valuable historical heritage of British coachworks was in danger of being lost forever and the remaining Bentleys would give a false impression of the brand’s history. It changed little because the demand for the open Bentleys remained high.

But as more and more chassis were fitted with a replica body, original closed bodies became rarer. Collectors became more interested in these cars. And that is reflected in the price development of these Bentleys.

In the development of the prices of W.O. Bentleys a few processes can be noticed. First we show the price development at auctions of Bentleys 4.5-Litre having an original Vanden Plas open body and those having a body in the style of Vanden Plas. It shows that over the years the difference in price increased. It should be mentioned that in 2018 H&H auctioned a 4.5-Litre having a replica body for £855,000. This car once belonged to Woolf Barnato. 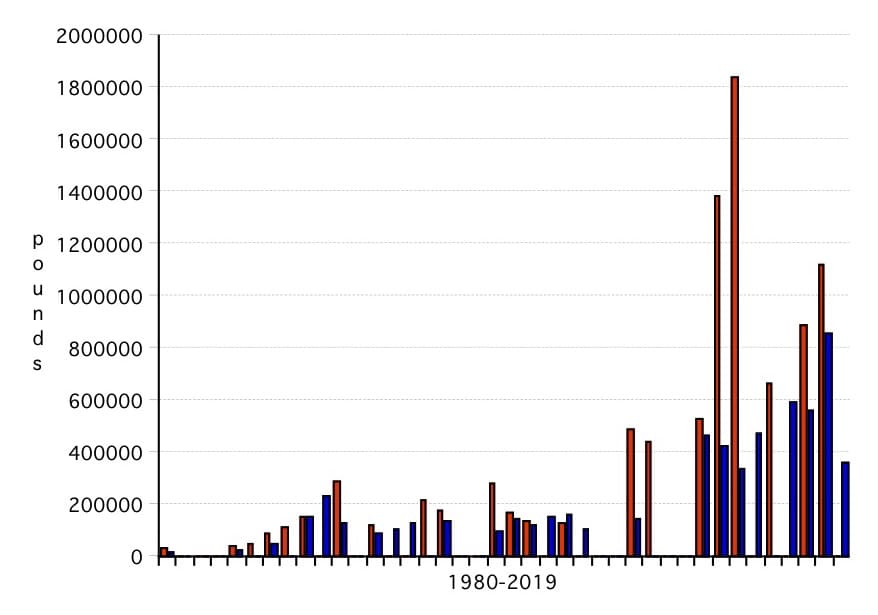 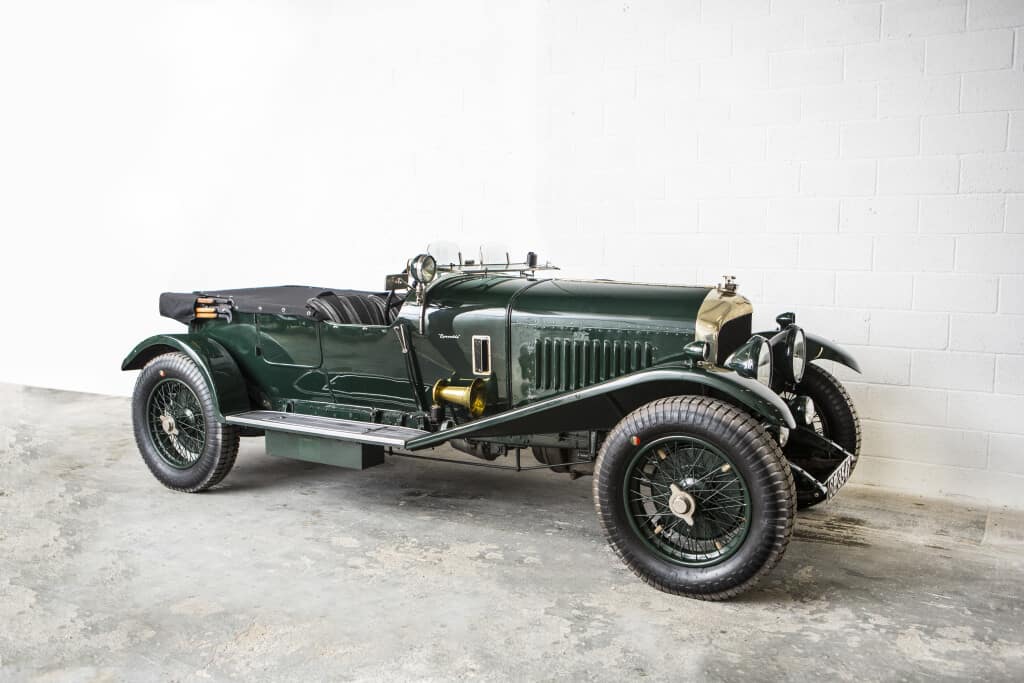 The difference in price between cars having an original closed coachwork and those with a replica open body has also changed over the years. For a long time an original 4.5-litre Drophead Coupe, Saloon or Limousine was mostly cheaper than a 4.5-litre with a new body in style of Vanden Plas. And that is why these bodies were often not restored, but demolished. Now a Bentley with such a closed coachwork is more scarce and often more expensive than another car with a replica body. The second bar graph shows the price development at auctions of Bentleys 4.5-Litre having a replica body and cars with an original closed coachwork. Although very few closed Bentleys were sold at auctions, the trend can be seen. 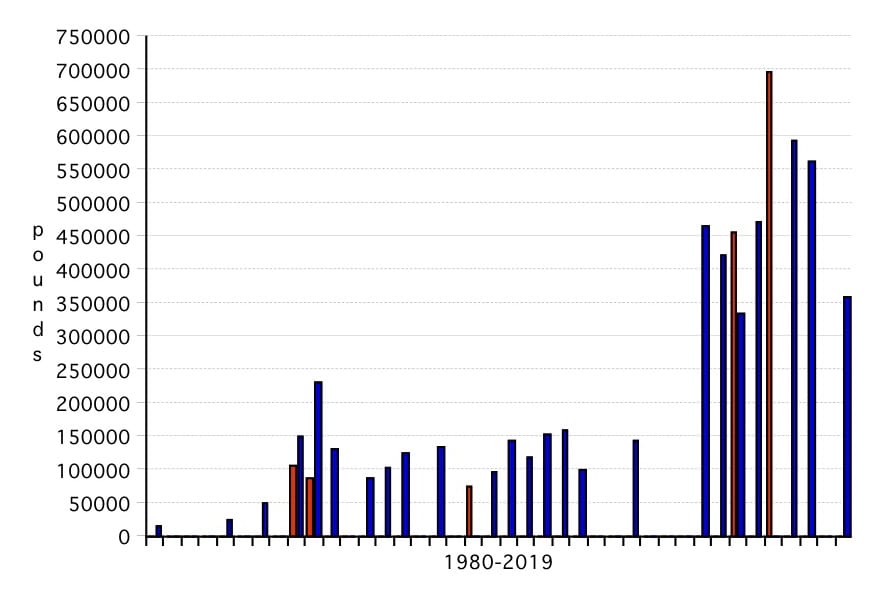 Highest auction results of a Bentley 4.5-Litre, red is original closed coachwork, blue is non-orginal Tourer. Not including the ex-Barnato with replica body H&H auctioned in 2018 for £855,000. 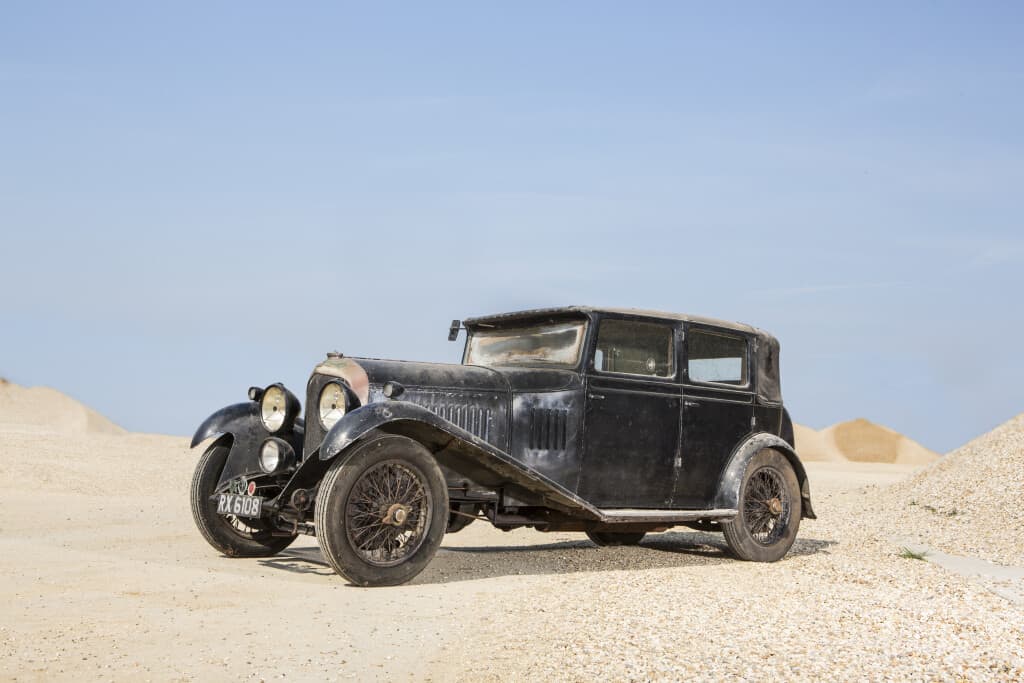 This development is more clear when we take a look at the Bentley Speeds Six. For example, a few Bentley Speed ​​Six cars were offered in 1992. One was fitted with a new body in the style of Le Mans and had an asking price of 285,000 pounds. For an original Speed ​​Six Open Tourer by Vanden Plas 600,000 pounds was requested. More than double. Afterwards, the original cars increased in value. In January 2006, RM Auctions auctioned a Bentley Speed ​​Six with replica Vanden Plas bodywork for nearly £350,000 and in August that year an original Tourer by Cadogan was auctioned for nearly 1 million pounds. And four years later, in August 2017, RM Sotheby’s auctioned a Sport Saloon by Corsica for nearly 3 million pounds. The price development between a car having an original coachwork (open or closed) and a non-original one is shown in the next bar graph. 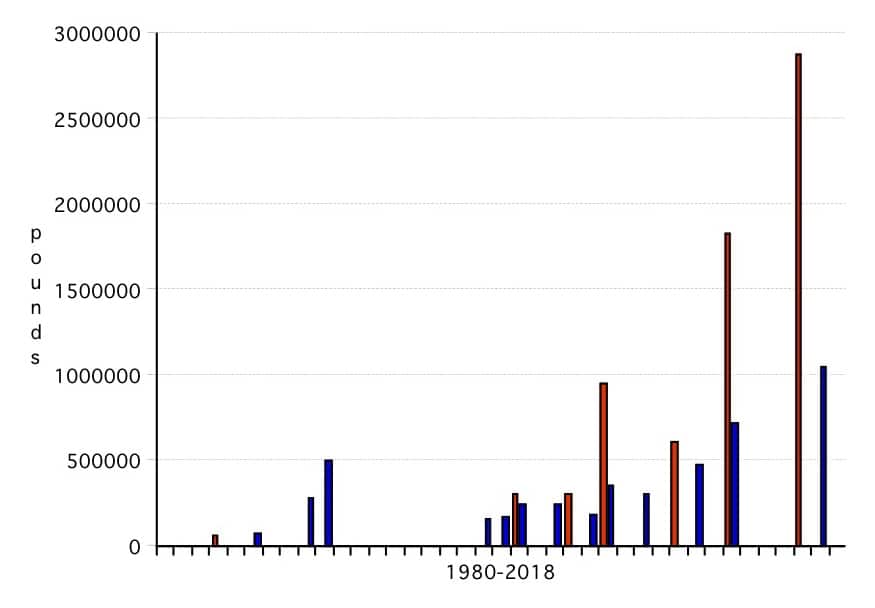 Highest auction results Bentley Speed Six, red is original coachwork, blue is non-orginal Tourer. Not including the Blue Train Sotheby’s auctioned in 1984 for £270,600 and not including the far more expensive Le Mans Team cars. 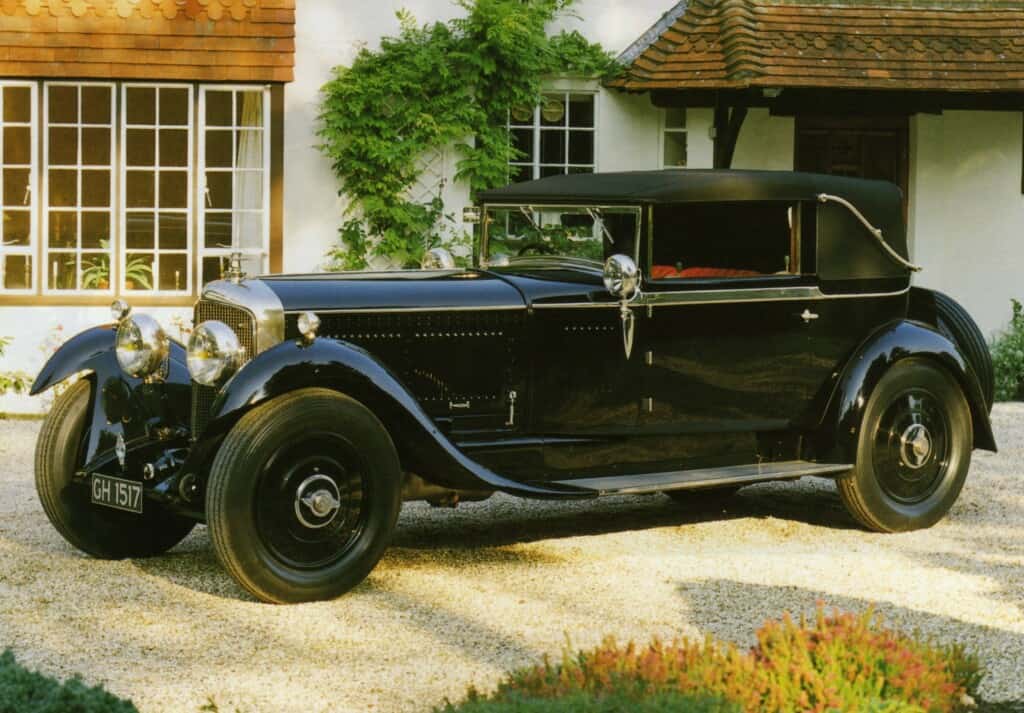 This also applies to the Bentley 8-Litre. The vast majority of them had closed coachwork and for a long time the interest in these cars was relatively limited. These cars too were fitted with an open body in the style of Vanden Plas. In August 1994, for example, Christie’s auctioned an unrestored Bentley 8-litre Saloon for £167,600. Exactly one year later, at Sotheby’s, an 8-litre model with a replica Le Mans body changed hands for £242,000. The Bentley having the replica body was more expensive than the original car. Little changed in later years. In December 2008 Bonhams auctioned a restored 8 -Litre Sedanca for £342,000. In March 2010, a car with a replica body was sold at an auction of Gooding & Company for almost £400,000. Afterwards, collectors became more interested in these Bentleys with the luxurious coachwork and the prices rose at auctions. In February 2013, Bonhams auctioned a Bentley 8-Litre with a replica Open Tourer body for around £ 410,000. In the same year RM Auctions sold a Saloon by A. Mulliner for £528,000. This is also shown in a bar graph. 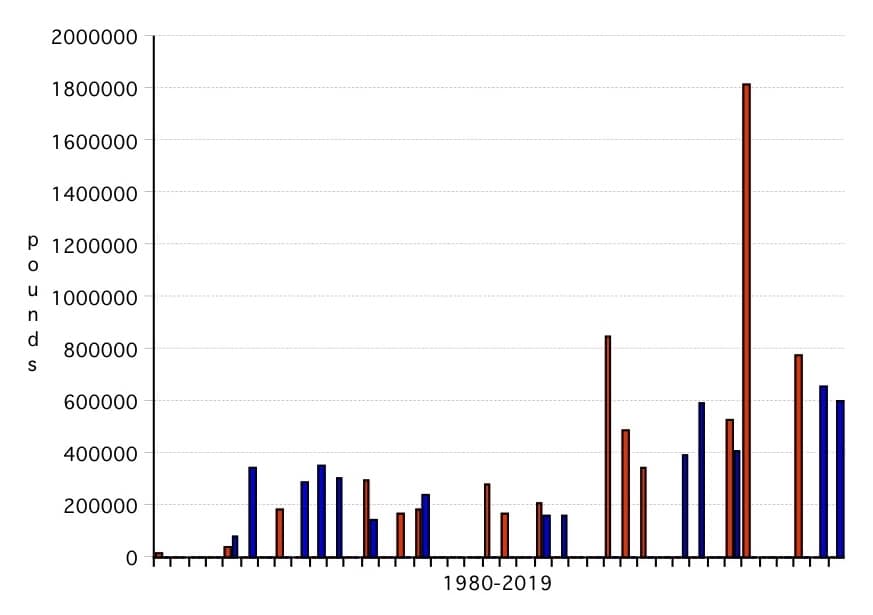 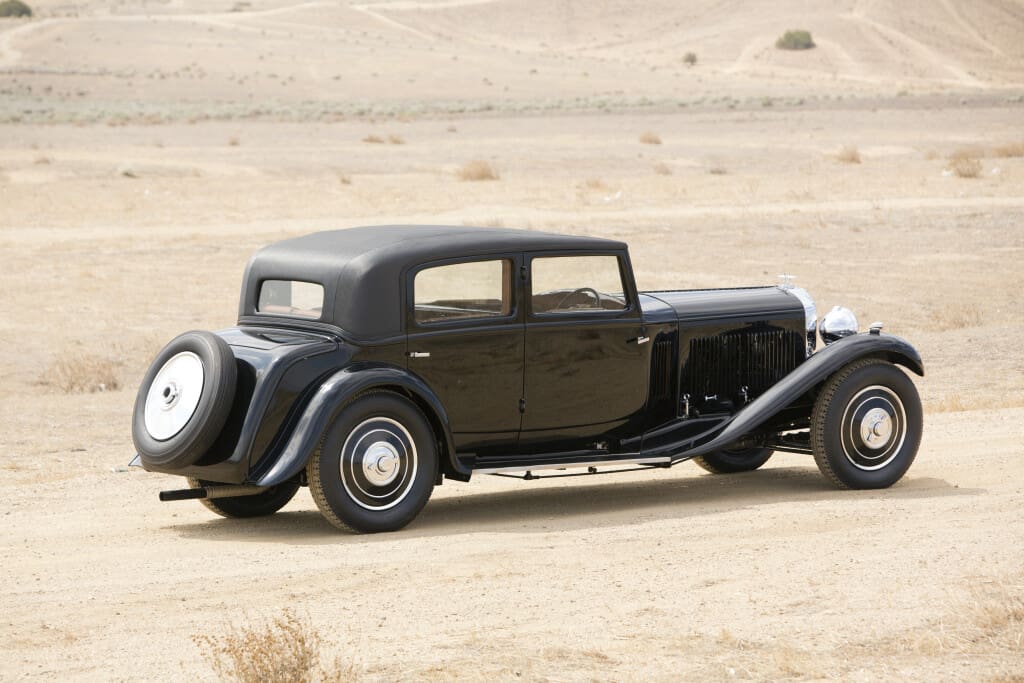 It’s a question what these developments will mean for the future of the 3-Litre. This applies in particular to the Bentley Speed Model and even more to the Super Sports, of which 513 and 18 were made respectively (out of a total of 1,622 3-Litre Bentleys). In February 2018 Bonhams auctioned a Speed Model with an original Vanden Plas bodywork for over £600,000. Was it a unique moment or is it an indication? Because in the same year at Gooding & Company a 3-Litre changed hands for £543,700. Will a Bentley 3-Litre Speed Model with an original open Vanden Plas coachwork in the future on average be worth more than a Bentley 4.5-Litre with a similar replica bodywork? This cannot be ruled out because collectors are increasingly paying attention to the originality of cars. 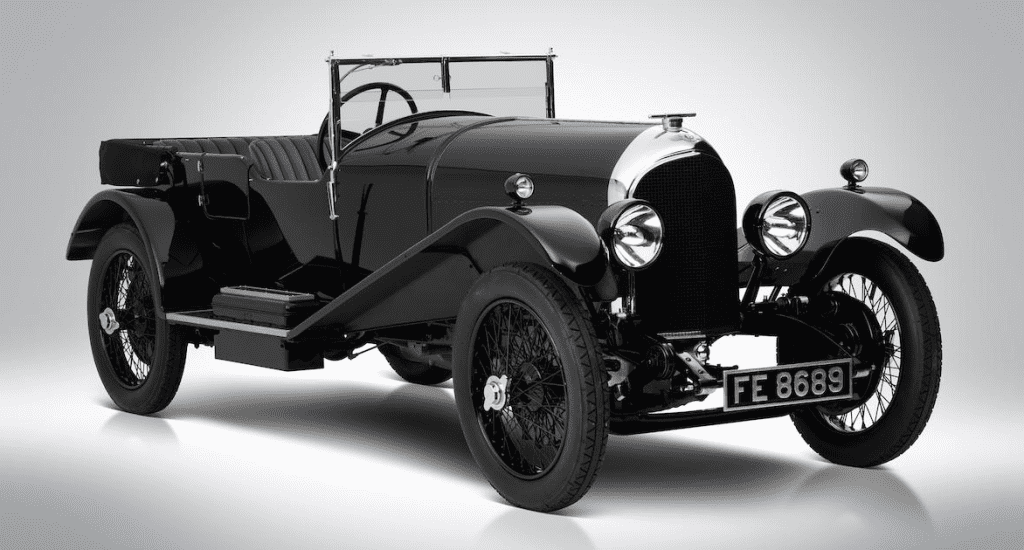